Whether they know it or not, everyone has used RFID at some point in their lives. The first radio transponders used during World War Two kicked off the development of this branch of technology. Through constant evolution, it has since grown to include today’s commonplace Radio Frequency Identification activated ID cards and key fobs. In the not-too-distant future it may even lead to people using a microchip embedded in their bodies to log into their PCs and pay at vending machines. The daily familiarly of RFID means that its benefits are often taken for granted, but it should not be underestimated.

If we dial it back to the basics, RFID is an identification technology, that uses radio frequency waves to transfer information between a reader and a tag. This enables people to design systems to identify, track and locate tagged items. The most common use across businesses is for access control, covering protection of staff and buildings, valuable assets or confidential information. These systems can involve anything from proximity cards and fobs, to biometric scanners. RFID cards are often uploaded with certain personal details to allow businesses to tackle issues around authorisation and security.

The potential use cases for this relatively simple system are endless, and Middle East businesses are starting to take note with some early adopters already reaping the benefits. An investigation into future uses of RFID suggested that the technology could, for example, be used to improve health and safety in office buildings by speeding up fire evacuations. You could log each employee leaving the building, making it easier to ensure that everyone has left safely. 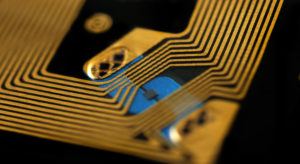 Although RFID is not sector specific, certain industries are more suited to its applications than others. With one of the Middle East’s core industries being oil and gas, leading operators have started rolling out RFID technologies for more efficient management of their terminals and fleets of vehicles, strengthening their entire supply chains.

The retail sector in the Middle East is also quickly adopting the technology to track their inventories, with regional cargo hubs such as Dubai where East meets West handling hug volumes of consumer and industrial goods alike.

Some businesses are looking even further into the future. A small group of employees at Stockholm’s Epicenter office space have voluntarily opted to have RFID chips implanted in their hands. They can use the chips to unlock doors, access printers and pay at vending machines. Controversial or not, the workspace is open about their desire to be early adopters of new technologies. Meanwhile, implanting a chip certainly makes it difficult for it to be misplaced, while also making the security system more seamless for employees.

But RFID isn’t infallible. Any time a new technology becomes mainstream, it presents an opportunity for hackers to find a way to exploit it. In 2013, low frequency RFID cards were being used everywhere from tech companies to hospitals. As these cards had no encryption or authentication, their information could be captured as soon as a ‘reader’ was nearby. While newer RFID cards have since been released which are built on a more secure technology, there are still many businesses that are using inherently vulnerable technology. According to one report, nearly 80% of all key cards used within commercial facilities may be prone to hacking due to protocol vulnerabilities, such as businesses still using the basic EM4100 cards and fobs. The widely used Mifare Classic RFID chip, once the backbone of the UK’s Oyster card and the Netherlands OV-chipkaart, was even hacked by students of the University of Holland showing just how vulnerable these older chips really are.

Introducing any technology comes with new and unpredictable risk. As businesses rapidly transform, they can fall into the trap of driving innovation without first establishing robust security measures.